At this writing, Aaslestad Preservation Consulting, llc is in the middle of a project to document the NC State Capitol building (1840) in Raleigh. The exterior surfaces are being documented both in line drawing and hybrid imagery. When this is wrapped up, the interiors will be given a similar treatment. These drawings will then be augmented by a series of detail drawings capturing the many rooms’ unique door and window profiles, friezes and such. Stay tuned! 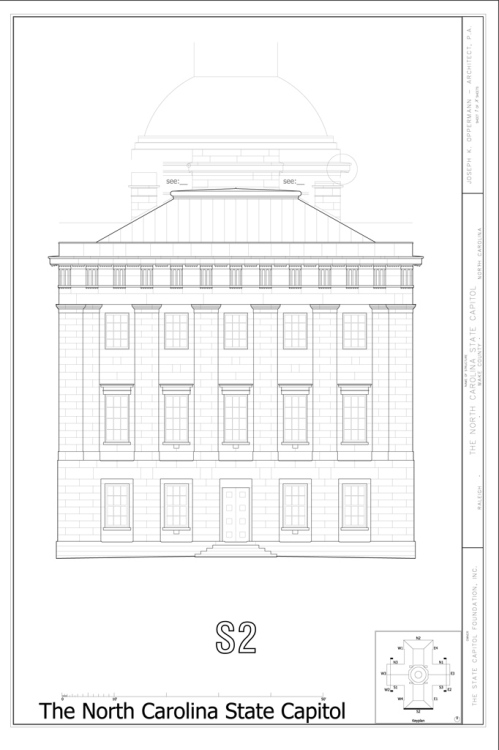 Line Drawing indicating the individual stones that compose the facade. 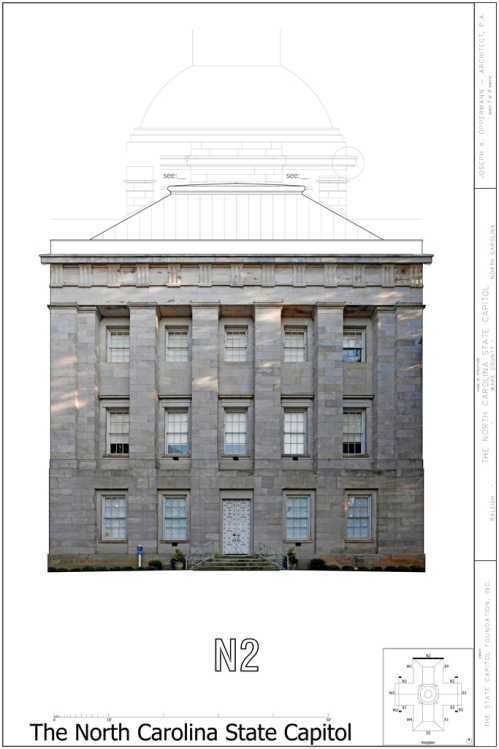 Hybrid Drawing incorporating rectified photographs of the individual stones that compose the facade into the line drawing. Note that the patches of sunlight shown here are a little confusing. This will have to be re-shot under better light conditions. 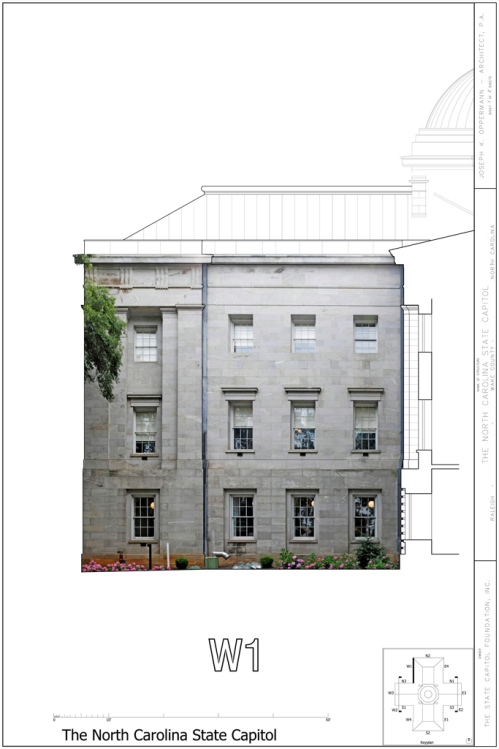 Some obstruction with regard to adjacent vegetation…

In this sheet, a new shot of the column will be required… 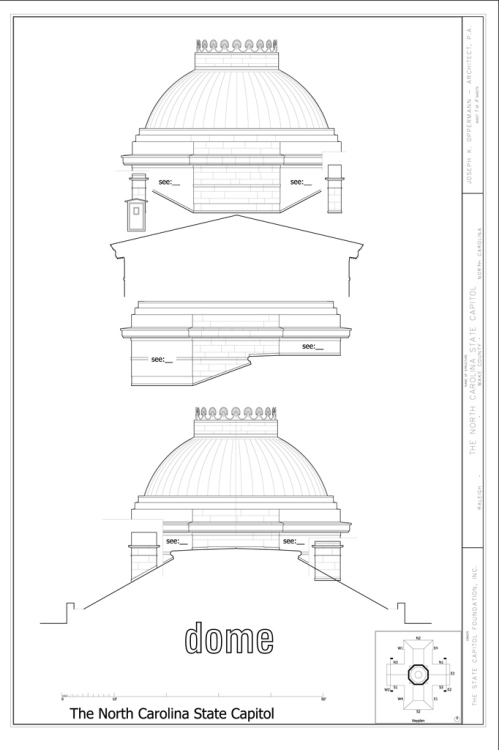 The dome is not safely accessible on all 8 sides; shown here are the three types of elevation (beneath the dome itself) that are repeated)

I’d argue that for preservation work, photogrammetry can often provide a richer sort of architectural documentation than laser scanning techniques.  There are merits to both techniques and their products, of course – each has its strengths vis-a-vis the other.

When comparing the products of photogrammetry and laser scanning, I find it interesting to see how they are converging and looking more and more alike as each respective technology continues to advance. Simply put, photogrammetry is producing richer and richer point clouds (a strong point for laser scanning) while laser scanning is producing higher fidelity imagery than ever before (but still far from the photographic quality required for sensitive preservation work).

But in some cases, photogrammetry wins the argument as to which technique is more appropriate to the task because it can perform in conditions that render laser scanning impossible. This is even more true when one factors in what it costs to get a project from start to finish. 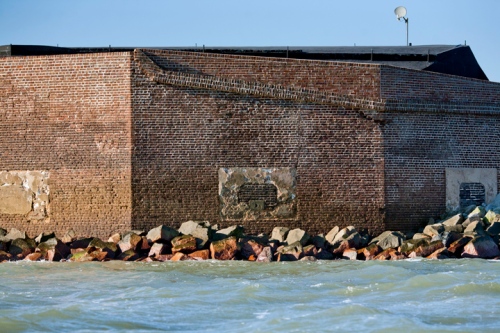 Take for example the work completed at Fort Sumter in Charleston Harbor by Aaslestad Preservation Consulting late last year.  In order to precisely map the layout, composition and condition of the fort’s exterior masonry walls, Aaslestad shot photos from a pitching boat!

Above is one of the shots used in the survey.  It was shot with a 200mm lens from a small craft that the Park Service provided Aaslestad to circumnavigate (as much as possible) the fort.  Later that day during the peak of low tide, Aaslestad was able to scramble around the the perimeter of the fort to collect a series of 16mm shots as well, see below. 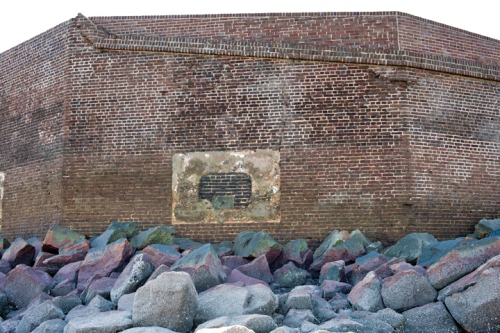 So the versatility of using a handheld camera for ‘data capture’ can make some jobs possible through photogrammetry that would otherwise be either impossible or much more time intensive and expensive. To be sure, a laser scanner is a fabulous piece of equipment that can produce incomparable results for some applications – but it needs a stable platform from which to operate (therefore can not be used from a pitching boat!).  Repositioning a laser scanner around the perimeter of Fort Sumter (on these slippery rocks shown above) during the relatively small window of opportunity of extreme low tide would also be unfeasible, or at the very least impractical and time consuming/expensive.

Another example of the versatility of using camera equipment for data capture with preservation in mind is the use of a telescopic tripod.  The shot below was taken using a remote shutter release while the camera was suspended 25′ above grade on a a tripod. Gaining points of views such as this can sometimes make the difference between be able to document a surface or not – or at the very least of enhancing a survey through greater quality of coverage. 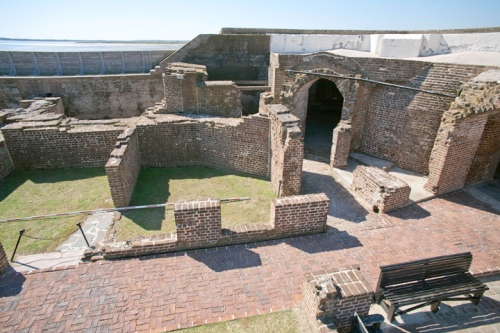 The courtyard at Fort Sumter from atop a telescoping tripod

Looking into the future we may see devices the size of an iPhone hovering around a structure like a miniature drone collecting 3-D scan data and high resolution digital imagery – maybe even sonography or thermography as well – but until then I’m very happy to rely on the versatility provided by a calibrated SLR. 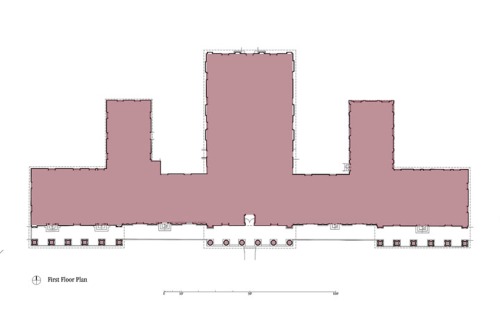 An envelope plan is a delineation of the extent of a building’s mass taken at a fixed elevation. It establishes a precise limit to the outermost profile of the building. Envelope plans are easily derived from photogrammetric surveys and point clouds that decribe the exterior conditions of a building.

The value of the envelope plan should not be overlooked. When charged with creating plan drawings of a building, the envelope plan is the first place to start. It provides a reliable framework against which any data from an interior survey can be compared – significantly reducing the occurrence of human error when constructing a detailed floor plan drawings depicting interior layouts.

When possible, I use data from photogrammetry to prepare envelope plans before I go inside a structure to collect additional observations. By establishing accurate envelope conditions, previously mysterious internal conditions that might have been otherwise unmeasurable (such as wall thicknesses) can then be reliably calculated. 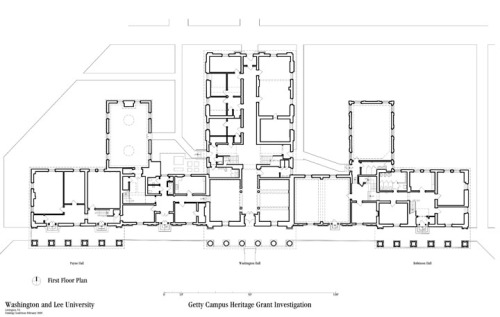 An envelope plan is especially valuable for non orthogonal structures. For some projects when I am collaborating with a team of architects who are close by to a project site, I prepare the envelope plan using photogrammetry and then hand it off to my colleagues who will complete the drawing during subsequent visits to the building. It is a great way to eliminate questions that arise amid a wealth of (sometimes) confusing field notes and measurements. 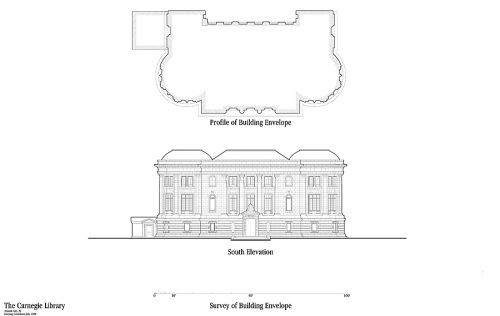 In 2005 While I was running the digital documentation studio for Frazier Associates I enjoyed working on this challenging project for the Rosewell Foundation.  My task was to create accurate, architectural documentation of the  remaining masonry walls of this once grand house on the York river in Gloucester County, Virginia. You can read more about the house here.

Documenting ruins is a little different than a standing building.  The goal is less about presenting a description of building in its “platonic essence” and more about presenting it as it actually is at this moment in time.  Capturing the way a wall, tower, or chimney is leaning becomes rather important!  To this end, I prepared the building prior to the photo shoot by fixing special targets that could establish a level datum line (using a laser level).

The drawings and photographs produced for this project were used by architects Mesick Cohen Wilson Baker to create a “Blueprint for the Preservation of the Ruins at Rosewell” which consisted of a history, an structural analysis, an archaeological report, and stabilization plan.

Old Main at Franklin and Marshall

Last spring I did some work at Franklin and Marshall College in Lancaster, PA.  I prepared a combination of measured drawings in CAD linked  to rectified photographs of the three oldest structures on the campus. These were then used as base documentation for an assessment of the existing conditions of the masonry surfaces across the extent of these buildings’ exterior facades.

The sequence of this work went roughly as follows:  I first shot photos of all of the buildings from points of view available on the ground (using a specially calibrated digital SLR).  Back in my offices in Virginia I used photogrammetric software to “back calculate” the camera stations and to make precise 3-D measurements of points on the three structures.  I used this dimensionally accurate point cloud as a reference to create rectified photographs of the surfaces visible from grade.

Using the point cloud and the rectified photographs I then created measured line drawings of the structures and laid them out onto tabloid size sheets for use in the field.  These were taken by hand up into an aerial lift so that conditions could be noted with a fair degree of accuracy once assessment were made both visually and manually.

Once the assessment was completed the data recorded on the field sheets was entered in the CAD drawings.  At this point the line drawings in CAD were enriched by a mosaic of rectified photographs visible inside of AutoCAD.  This allows for an accurate transfer of notes from the field to eventual construction documents.  A sketch of an area or region can be transferred to CAD and become dimensionally reliable.  This is a very important step because it provides for an accurate tally of areas to be treated in one way or another.

Since the main structure was rather tall, I also returned to the site to go up in the aerial lift to collect more photographs to further enrich my drawings with better rectified images of areas that were either blocked by vegetation, neighboring buildings, or were too foreshortened to provide good rectified images.